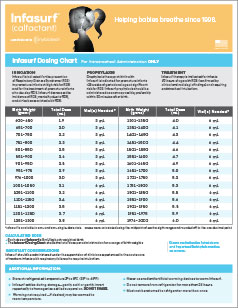 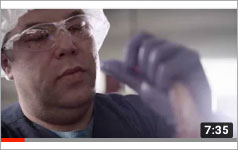 Infasurf is indicated for the prevention of Respiratory Distress Syndrome (RDS) in premature infants at high risk for RDS and for the treatment of premature infants who develop RDS. Infasurf decreases the incidence of RDS, mortality due to RDS, and air leaks associated with RDS.

Prophylaxis therapy at birth with Infasurf is indicated for premature infants <29 weeks of gestational age at significant risk for RDS. Infasurf prophylaxis should be administered as soon as possible, preferably within 30 minutes after birth.

Infasurf therapy is indicated for infants ≤72 hours of age with RDS (confirmed by clinical and radiologic findings) and requiring endotracheal intubation.

Infasurf is intended for intratracheal use only. THE ADMINISTRATION OF EXOGENOUS SURFACTANTS, INCLUDING INFASURF, OFTEN RAPIDLY IMPROVES OXYGENATION AND LUNG COMPLIANCE. Following administration of Infasurf, patients should be carefully monitored so that oxygen therapy and ventilatory support can be modified in response to changes in respiratory status.

Infasurf therapy is not a substitute for neonatal intensive care. Optimal care of premature infants at risk for RDS and newborn infants with RDS who need endotracheal intubation requires an acute care unit organized, staffed, equipped, and experienced with intubation, ventilator management, and general care of these patients.

TRANSIENT EPISODES OF REFLUX OF INFASURF INTO THE ENDOTRACHEAL TUBE, CYANOSIS, BRADYCARDIA, OR AIRWAY OBSTRUCTION HAVE OCCURRED DURING THE DOSING PROCEDURES that required stopping Infasurf and taking appropriate measures to alleviate the condition. After the patient is stable, dosing can proceed with appropriate monitoring.

An increased proportion of patients with both intraventricular hemorrhage (IVH) and periventricular leukomalacia (PVL) was observed in Infasurf-treated infants in the Infasurf-Exosurf Neonatal controlled trials. These observations were not associated with increased mortality.

The most common adverse reactions associated with Infasurf dosing procedures in the controlled trials were cyanosis (65%), airway obstruction (39%), bradycardia (34%), reflux of surfactant into the endotracheal tube (21%), requirement for manual ventilation (16%), and reintubation (3%). These events were generally transient and not associated with serious complications or death.

The incidence of common complications of prematurity and RDS in the four controlled Infasurf trials are presented in the Table. Prophylaxis and treatment study results for each surfactant are combined.

The information contained in this site is intended for U.S. healthcare professionals only.

Select “Yes” if you are a U.S. healthcare professional.